Misty Copeland sparked widespread awareness of ballet this summer, when she became the first African-American female principal at American Ballet Theatre. But this centuries-old dance form is rarely so high in the public consciousness.

An effort to change that is now moving at full throttle, led by Jennifer Homans, author of the best-selling 2010 book “Apollo’s Angels,” a history of ballet with a famously doom-and-gloom conclusion.

“After years of trying to convince myself otherwise,” she wrote, “I now feel sure that ballet is dying.”

To prevent that outcome, she established the Center for Ballet and the Arts last fall, inviting everyone from pop singers to puppeteers to come and shake up the dance world.

Begun with a $2 million grant from the Andrew W. Mellon Foundation, the center is housed at New York University, which has provided it with both office space and a new dance studio.

In the center’s busy first year, it has bestowed fellowships on filmmakers, philosophers, musicians or anyone with an innovative proposal for a project that will keep the field developing apace with the arts, humanities and sciences.

“The idea is to broaden by bringing people together,” Ms. Homans said, “and then deepen.”

So far, 25 grantees have been engaged, each receiving stipends of $3,000 a month, plus NYU housing.

Among the first group in fall 2014 was documentary filmmaker Frederick Wiseman, who collaborated with a choreographer to make ballet inspired by his film about the criminally insane. The second round, of 11, included pop singer Suzanne Vega, whose project melded ballet and song.

Now, the center is announcing eight new fellows, including puppeteer Basil Twist, best known for an acclaimed underwater puppet show, and art professor Juliet Bellow, who has been researching the relationship between art and dance in the 19th and 20th centuries.

“I’m trying to create a place where people can do things that are experimental,” said Ms. Homans. 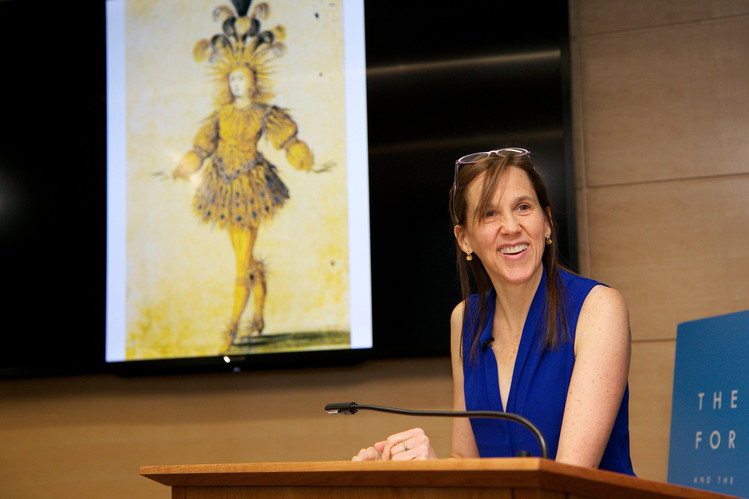 At the center’s slick, spacious offices on Cooper Square, where fellows are expected to do most of their work, events and gatherings create a sense of community, said Mr. Wiseman. “I got into wicked arguments about ‘does ballet have meaning?’ ” he said.

Mr. Wiseman, who has made ballet companies the subject of his documentaries, said he has had a 20-year interest in the form, but found the themes repetitive. “I got tired of seeing new ballets about relationships,” he said.

Through the center’s network, he found choreographer James Sewell to collaborate with him on a ballet exploring the physical movements of the mentally ill prisoners, whose lives Mr. Wiseman documented in his 1967 film “Titicut Follies.”

“When I made this movie, I was struck by some of the odd movements of some of the prisoners,” he said, adding that he wanted to return to it as source material for dance. “You never see awkwardness or ugliness in ballet.”

It is a perspective the center welcomes. After Ms. Homans’s book was published, her assessment burned through the industry, sparking arguments and some resentment. It also caught the attention of the Mellon Foundation, which began a series of conversations with Ms. Homans about what could be done to change things.

The idea of actively drawing in new thinkers won because ballet, in its very nature, can be cloistered.

“It is an internalized discipline that doesn’t receive much external input in terms of ideas from other arts or scholarly disciplines,” said Mariët Westermann, vice president of the Mellon Foundation.

NYU’s Vice Provost Ulrich Baer said the university saw an opportunity to be a leader by giving the art form a new intellectual platform.

“People in the university could benefit from understanding ballet in a different way,” he said. “I don’t know that they really have ballet on their radar.”

Former dancers make up a fair percentage of the roster of fellows, including Heather Watts, Christopher d’Amboise and John Michael Schert, who researched ways that retired dancers can use their nonverbal skills to their economic advantage and to engage with academics in a new way.

“Dancers are masters of nonverbal communication,” he said. “Are these skills translatable? Are they only limited to the studio and the stage?”

In addition to the interdisciplinary fellowships, the center will offer a new, separate one addressing the lack of female choreographers. It will come with a larger stipend—$35,000 a semester—provided by the Virginia B. Toulmin Foundation.

Ms. Homans, herself a former dancer, is able to renew the three-year grant from the Mellon Foundation for 10 years.

And she is well aware that the center’s output could be enough of a catalyst to keep ballet from withering, disproving her book’s conclusion.

That would be fine, she said: “The ballet world has to change.”

NYU News - Why Do Humans Dance? New Research Fellowship Explores the Evolution and Neuroscience of Dance